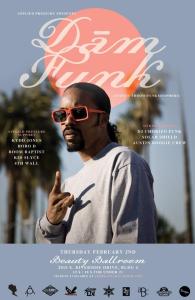 I was an instant fan of Dam Funk when I first heard his music around 2008. Smooth, soulful, and musical but still as hard as triple o.g. status. Never forced, rushed, or contrived. Contemporary urban artists…. take note.

Harmonious, ambient, and spacey but still street. You see there’s an obvious lack of love in contemporary urban music, so when I hear Dam I know that he’s influenced by the old school because he stands out from anything you hear on mainstream radio. He’s from an era when music was music as Steve Harvey so put it in Kings of Comedy.

A time when musicianship and singing ability were requirements to becoming an artist, but being able to sing or play an instrument wasn’t enough to stand out. You had to have Soul… True Soul music has a message behind it. Pain, love, and beauty are a few examples that I hear in Dam’s music and other contemporaries in the modern funk sound.

You can tune into any radio station across the country that claims to be the home of hip hop and R&B and you won’t find music as soulful, hard, and honest as Dam Funk. He’s in his own lane….. straight coastin’.

It took over twenty years before Dam was given the platform to present his music to the world with the release of his debut album in 2009, Toeachizown, (Stone Throw Records) but the timing couldn’t have been better. He’s won over the world wide underground, released a critically acclaimed album, and gained the reputation as the leader of the Modern Funk movement….timing is everything when you love what you do.

Austin February 2nd, Dam Funk at the NEW Beauty Ballroom. Applied Pressure, myself, and a host of other local talent providing support as well. Gyeah! FB.

Also here’s the last interview that Dam Funk did with J-1 (RIP) and Computer Jay also know as Master Blazter.

Check this interview from Dam below. You might just learn something. The funk lives on.

All Rise an MLK Tribute